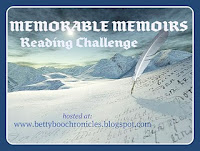 Since memoir is being loosely defined for this challenge, I'm going for a slightly larger number. I also think that this challenge will overlap nicely with the foodie and Europe challenges.


"What Counts as A Memoir?
I know there's a difference between memoir and autobiography, but for this challenge, we're going to define memoir as a record of events written by a person having intimate knowledge of them and based on personal observation. Published letters, diaries, journals, autobiographies, nonfiction books on the craft of writing memoirs ... in my book, they all count as Memorable Memoirs for this challenge. (Generally, biographies don't, but I could always be convinced.) "

The level I am choosing is Autobiographer: read 5-9 memoirs. I will list them below.